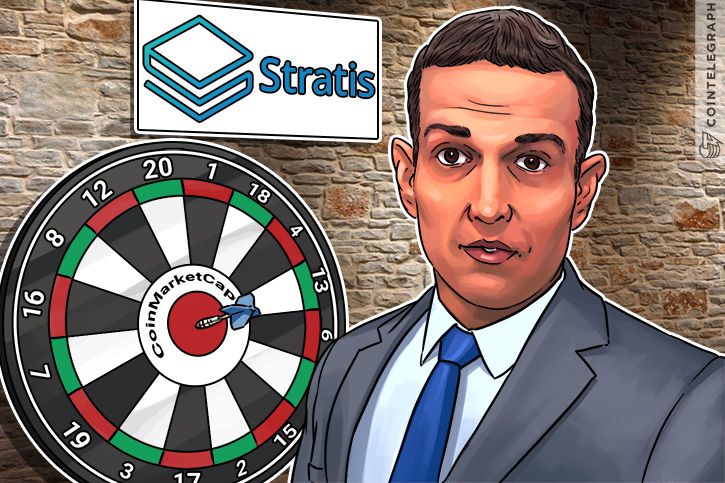 Indeed, wonders shall never end in the crypto land.

Stratis, the Blockchain application token, which entered the top 10 less than two weeks ago selling for a few dollars, is now being sold for $11.42. At 10:00 GMT on Saturday, it sprang 52.55 percent making a casualty of Monero and Dash to become the seventh most expensive digital currency in the world. Its market capitalization is now worth more than $1 bln. On its way to the elite range, it displaced Golem and later Stellar Lumens to occupy the ninth spot. It then overtook Monero to take the number eight spot but Monero fought back to push it back to the ninth rank.

Cointelegraph reached out to Stratis holders to gauge their opinion. "Well, I bought early, so I am happy, I guess," exclaims Thegoodhen. "I think Stratis has a lot of upward potentials," he adds. Another holder, TJAndy, says he bought Stratis when it was just 60 cents, and it has since shown tremendous growth ($11.42 as of now) within a short period of time. "This is just the beginning - you can think of this as filling the rocket with fuel right now, preparing to take off in the near future," he notes.

"I am feeling amazed and hoping everyone that has joined did it due to the promising technology of Stratis. The gains are impressive. They are happening when I am sleeping, so every day is a day when I wake up surprised,” Pvink states. When Cointelegraph asked JPR how he feels, he smiled and said: "Well it changed my life. I left my day job and now I can just do what I like, which is investing in Blockchain projects."

The holders of Stratis are optimistic about its future and believe there is more to come. JPR says: "It looks promising. The team announced they are about to double the number of full-time developers. At the moment, they have over $20 mln to spend on development and marketing and they have not even finished the funding round yet. The growth is going to explode now." Even though Thegoodhen says he is not an oracle, he states that it would be "fair" to foresee Stratis reaching the price of ETC based on its similarity and the fact that it has better development.

He explained further: "I wouldn't put my life savings into it but I feel it's still undervalued, probably. The price of cryptos is mostly driven by speculation at this point. I wouldn't put a million bucks into it but it's a good thing to have in your portfolio. The best thing would be to save some money you can afford to lose every week and put it in cryptos, Stratis being one of them. I personally hope for Stratis to reach $100."

Moreso, Pvink believes the future looks bright, so long as the team keeps up with the development. "For now, I have a good feeling as they never missed a deadline," Pvink concluded. Either way, it is only with time in which the sustainability of a coin can be determined. Thus, for example, Ripple gained a market cap of $18 bln and reverted back to $8 bln. One more thing to consider is the performance of coins after the ICO. The price change of Stratis token is quite impressive leaving even Augur and Lisk behind.